Podium result for Porsche at the virtual Virginia International Raceway

Stuttgart. Porsche has notched up another success at round five of the IMSA iRacing Pro Series on the virtual Virginia International Raceway in Alton (USA). The New Zealander Shane van Gisbergen concluded the 90-minute race on second place at the wheel of the No. 97 Porsche 911 RSR. Works driver Laurens Vanthoor from Belgium was stymied by bad luck. After a strong qualifying performance, the reigning champion of the real IMSA WeatherTech SportsCar Championship was thrown far down the field after touching another car in lap one. The American Shinya Mishimi put in another impressive drive to finish fourth at the wheel of his No. 86 Porsche 911 RSR.

Van Gisbergen, one of the big stars in the Australian Supercars Championship, had taken up the virtual race from fifth on the grid with the Porsche 911 RSR entered by the AIM Vasser Sullivan team. Over the race distance, the experienced touring car driver kept out of trouble and, with patience and oversight, held a steady course for the podium. Shortly before the end of the penultimate round of the IMSA iRacing Pro Series, the 31-year-old from Auckland profited from several incidents among the frontrunners to ultimately take the flag in second after 50 laps, just 4.957 seconds behind the winner.

For the Porsche works driver Vanthoor, the dream of scoring a top result in the sim racing competition on the tradition-steep 5.26-kilometre circuit was shattered early on. Starting from the fourth grid spot, the Belgium became entangled in an incident in the first lap and dropped back to 34th place. Putting in a spirited charge, Vanthoor worked his way back up to twelfth place by the mid-way mark, only to have a pit stop and subsequent damage repairs undo his good work. The 29-year-old Belgian, who lives in the German town of Waiblingen, finished his race on P38.

The sixth and final race on the IMSA iRacing Pro Series calendar takes place on 11 June at the virtual and venerable track of Watkins Glen (USA).

Comments on the race
Laurens Vanthoor (Porsche 911 RSR #912): “I was extremely unlucky in this race. My qualifying result was strong; position four was great progress for me compared to the previous sim racing competitions. I deliberately tried to keep out of any trouble in the starting phase. I kept well clear of the other drivers, but then a typical phenomenon of online racing threw everything into disarray. Some driver close to me apparently had a poor internet connection. The iRacing platform then assesses some situations as contact, when in fact there was none. In the replay, you can see that I didn’t touch anyone. I suddenly spun like crazy and was hit by several cars. That was the end of that.” 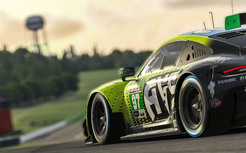 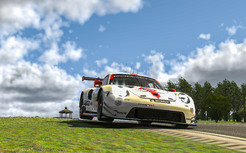 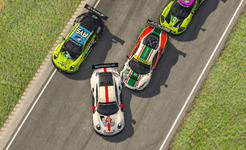 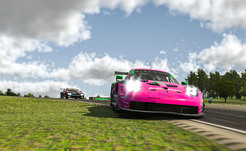 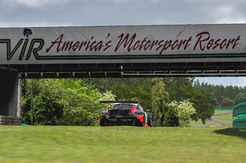