Angelique Kerber getting back to her old form

Stuttgart. Angelique Kerber has already won the Porsche Tennis Grand Prix on two occasions. Now on her return to Stuttgart, her wins in 2015 and 2016 are not the only reasons why she is happy to be back in the city. “We players love this tournament. For us, it is something akin to an oasis of well-being on the WTA Tour,” says the German who connects many memories with her appearances in the Porsche Arena. “This tournament has basically accompanied me all through my career. I was able to get lots of important experience there, experience that has done me a world of good. I learnt things even when I lost.”

Her start to the 2021 tennis year was rather bumpy. Due in no small way to corona, she had a long time to prepare for the Australian Open, and took advantage. But then only just after landing full of confidence in Melbourne, she was forced into strict quarantine for two weeks after a passenger on the flight had tested positive. It meant that not only the year’s first grand slam was over for her. “Quarantine set me back two months,” she said and is now glad to be back on track: “I felt in shape again at the Miami tournament and also had a feel for my game.”

After the difficult start to the season, getting back into the swing of things has not been easy for the Porsche Brand Ambassador. Last year, she only played a few tournaments partly because of niggly injuries but also because many events did not take place because of corona. She still lacks the match practice she missed out on. “No matter how well one practices, matches at tournaments are totally different,” she says. “I’m a player that needs lots of matches and tournaments. It has therefore been more difficult for me to find my rhythm this season.”

The pandemic governs daily life on the WTA Tour. For many players, it is not easy coming to terms with life in the corona bubble, but Angelique Kerber does not want to complain. “Compared to most people that have to accept loads of restrictions in their day-to-day lives, we professional tennis players are in a very privileged position. After all, we can still go about our business,” she says. “We can feel lucky that there are organisers with the commitment and lifeblood necessary to stage tournaments in these times of crisis.”

The world’s top stars will be in town for the Porsche Tennis Grand Prix from 17 to 25 April. Seven players ranked in the world’s Top 10 and a total of 14 in the Top 20 will be in action in the Porsche Arena. Angelique Kerber sees such an elite field as a challenge. “For me, strong opponents are always extra motivation,” she says. When winning for the first time in Stuttgart in 2015, she was faced in the final by the then world number 1, Caroline Wozniacki. The memories of her first big success have not paled. “Winning such a fantastic tournament for the first time is something you never forget. Especially because the final against Caroline was a real thriller,” she says. Behind in the third set, she then turned the match around with the assistance of the crowd’s vociferous support. She also still has good memories of her second success in the Porsche Arena – against Laura Siegemund in 2016. “She played a fantastic tournament and made it to the final as a qualifier. All the pressure was on me as the favourite. It was another important experience in my career.”

In the Porsche Arena, Angelique Kerber wants to play as many matches as possible and consequently return to her old form and therefore be ready to face further challenges. “There are important tournaments coming up in the next weeks and they’re tournaments I’m really looking forward to,” she says. The things she misses most of all in these corona times? “Definitely the fans,” she says before continuing, “I was always motivated most of all by going out onto court, giving my best and seeing the fans celebrating with me, cheering me on and rooting for me. For me, it’s the nicest thing about my profession.”

Porsche in tennis
Porsche has been sponsoring the Porsche Tennis Grand Prix ever since 1978 and has also been the organiser since 2002. The tournament in Stuttgart’s Porsche Arena was voted by the players as their favourite event in its category once again in 2019. Within the scope of its global partnership with the Women’s Tennis Association (WTA), Porsche is also the title partner of the “Porsche Race to Shenzhen”, the official qualifying ranking for the Shiseido WTA Finals. The Stuttgart-based sports car manufacturer is also the exclusive automotive partner of the WTA as well as the WTA Finals, and this year the WTA tournaments in Lyon and St. Petersburg. As a premium partner of the “Deutsche Tennis Bund” (DTB – German Tennis Association), the company supports Porsche Team Germany in the Billie Jean King Cup (formerly the Fed Cup) and fosters up-and-coming players in the Porsche Talent Team and the Porsche Junior Team. Angelique Kerber, Julia Görges and Maria Sharapova give Porsche a face in tennis as Brand Ambassadors.

Angelique Kerber getting back to her old form 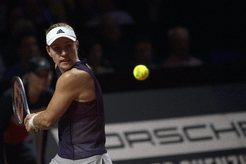