Stuttgart/Prague. The semifinals at the Billie Jean King Cup in Prague will take place without Porsche Team Germany. In the last group match, the German Tennis Association’s (DTB) team headed by the Porsche Brand Ambassador Angelique Kerber was defeated 3-0 by Switzerland on Tuesday and have duly exited the finals at the first hurdle. The team’s opening match on the day before at the inaugural finals with the new format containing 12 countries also ended in defeat (2-1) after a hard-fought encounter against the top favourites, the Czech Republic.

“We’d have obviously loved to have progressed but not everything in tennis goes the way you like,” said team captain Rainer Schüttler. “As a team, we had a fantastic week in Prague but in the end the disappointment naturally outweighs everything.”

In a high-class match, Angelique Kerber prevailed in the face-off between the top stars when beating Barbora Krejikova, the Czech French Open winner and current world No. 3. She was however unable to repeat the brilliant performance against the Olympic champion Belinda Bencic. After winning the first set 7-5, she then lost the second 6-2. There was initially little to choose between the two players in the third set but then with the score at 3-2 in Bencic’s favour, the German needed a medical time-out due back spasms and never really got back into the match. Playing highly impressively, Belinda Bencic once again closed out the set 6-2.

“It was a high-class match. Everything hinged on me losing my first service game in the second set. On the whole, Belinda played really well and basically didn’t make a single mistake in the third set,” said Angelique Kerber. “We’re naturally sad and disappointed that we’re out of the finals, but we’ll try to take away the positives. We had a fabulous week together and gave our all on the court. Above all, it was definitely a great experience for the young players on our team, and one that will help them move forwards. I’m now looking forward to going on holiday before beginning my Australian Open preparations.”

Andrea Petkovic, who was making her 18th appearance for Germany at the finals, lost her match 6-4, 7-5 against Viktorija Golubic. In the hard-fought second set, she failed to convert three set points when 5-4 up. “It took a while to get into a rhythm, but it unfortunately wasn’t enough,” she said. “I lacked a bit of balance on the big points. I had my chances but was unable to take them. She was simply better when it mattered.”

After Jule Niemeier against the Czech Republic, the second Porsche Talent Team player also made her Billie Jean King Cup debut in the match against Switzerland. Nastasja Schunk, who got to the Wimbledon juniors final in July, was picked for the concluding doubles with Anna-Lena Friedsam. Aged only 18, she played well after overcoming initial nerves. In the end however, the experienced Viktorija Golubic and Jill Teichmann ran out comfortable 6-1, 6-2 winners.

The Billie Jean King Cup by BNP Paribas Finals
The former Fed Cup has been renamed the Billie Jean King Cup this year. The International Tennis Federation (ITF) thus recognises the efforts of the former American world class player to promote professional women’s tennis and players’ equal rights. The inaugural finals will be played in a new format with 12 top teams divided up into four groups in Pragueue from 1 to 4 November. Group A: France, Russia (Russian Tennis Federation), Canada, Group B: Australia, Belarus, Belgium, Group C: USA, Spain, Slovakia, Group D. Porsche Team Germany, Czech Republic, Switzerland. Each tie will comprise of two singles and one doubles. The group winners will qualify for the semifinals on 5 November where Group A and C’s top teams will face each other as will the Group B and Group D winners. The final will be played on 6 November.

Porsche in tennis
Porsche has been sponsoring the Porsche Tennis Grand Prix ever since 1978 and has also been the organiser since 2002. In the last vote to take place, the tournament in Stuttgart’s Porsche Arena was chosen by the players as their favourite event in its category. Within the scope of its global partnership with the Women’s Tennis Association (WTA), Porsche is also the title partner of the “Porsche Race to the WTA Finals”, the official qualifying ranking for the WTA Finals. The Stuttgart-based sports car manufacturer is also the exclusive automotive partner of the WTA, the season-ending WTA Finals and of this year’s WTA tournaments in Lyon (France), St. Petersburg (Russia), Berlin and Bad Homburg (Germany), Cincinnati (USA), Linz (Austria) and the two events in Cluj (Romania). As a premium partner of the “Deutsche Tennis Bund” (DTB – German Tennis Association), the company supports Porsche Team Germany in the Billie Jean King Cup (formerly the Fed Cup) and fosters up-and-coming players in the Porsche Talent Team and the Porsche Junior Team. Angelique Kerber, Julia Görges and Maria Sharapova give Porsche a face in tennis as Brand Ambassadors. 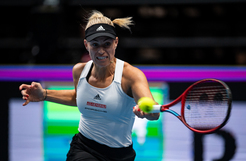 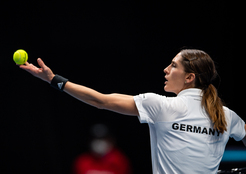 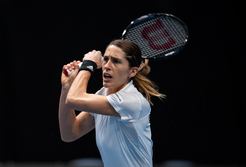 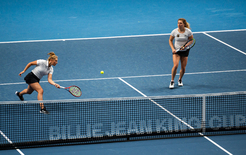