Stuttgart. The world’s crème de la crème plus an attractive supporting programme of events – awaiting visitors to the 45th Porsche Tennis Grand Prix from 16 to 24 April is a mixture of top-class tennis and entertainment that will turn the long-standing tournament into an event for the whole family. Tournament Director Markus Günthardt expects a tennis week full of superlatives saying, “We’ll be offering our guests lots of great quality in every sector.”

Nine Top 10 players will bring a whiff of a Grand Slam tournament to the Porsche Arena. Of the world’s leading 20 players, 15 will be competing. Heading the seedings is the Pole Iga Swiatek, the new world number 1 after her recent wins in Doha, Indian Wells and Miami. She will be making her first ever appearance in Stuttgart. “When talking to my fellow players, many have raved about the tournament. I’m really looking to finally being a part of everything,” says the 2020 French Open champion. For her, the Porsche Tennis Grand Prix is the ideal preparation for Roland Garros, and the Porsche Taycan GTS Sport Turismo as the main prize for the winner is an additional spur. “I’ve had a driver’s licence now for six months and am looking forward to getting around to driving a Porsche. Or even better, winning one.”

The Porsche Brand Ambassadors Angelique Kerber and Emma Raducanu will also be in the starting line-up in the Porsche Arena. Alongside the British 2021 US Open winner, USA’s Cori Gauff is one of the young faces that stands for the future of women’s tennis. She will also be making her Porsche Tennis Grand Prix debut. Tennis fans will also be eager to see Bianca Andreescu. After being given a wild card, the Canadian 2019 US Open winner will be making a comeback on the WTA Tour after a long layoff and many setbacks.

Laura Siegemund, last week’s doubles winner in Miami has also received a main draw wild card for her home tournament. The German won in the Porsche Arena in 2017. Three Porsche Talent Team players also have the chance of competing against the world’s best and therefore gain valuable experience. Jule Niemeier has received a main draw wild card and Nastasja Schunk and Eva Lys ones for qualifying.

“Our main draw field is sensational. The fact that so many top players will be playing here is proof of the incredible trust they place in us,” says Tournament Director Markus Günthardt. Anke Huber, who backs him up as the Operating Tournament Director, adds, “We’ve got real strength in depth. Our spectators can look forward to tennis of the highest class. From a tennis point of view, it’s going to be a tournament to remember.”

“Aces for Charity”: Porsche donates to children from Ukraine
Through the Aces for Charity campaign, Porsche will donate 100 euro for every ace hit during the Porsche Tennis Grand Prix. The donation will this year again be divided up equally between the “Stiftung Agapedia” foundation and the regional “Landessportverband Baden-Württemberg” sports association. It will be used for projects for refugees from Ukraine. The Stiftung Agapedia will therefore primarily finance measures to care for the in part traumatised child refugees and their relatives. The Landessportverband Baden-Württemberg will above all support elite Ukrainian athletes that have been forced to flee their country, whereby the focus is on children and adolescents as well as coaches and their families.

“The tournament has been a sporting highlight for over 40 years,” says Sebastian Rudolph, Vice President Communications, Sustainability and Politics at Porsche AG. “With the traditional charity campaign, we want to acknowledge our societal responsibility as a company. We are delighted to support charitable organisations in their vital work. This year, our focus is on projects providing assistance for refugees from Ukraine.”

Attractive supporting programme with sport and entertainment
The Porsche Tennis Grand Prix offers its spectators not only world class tennis. An attractive supporting programme of events with a colourful mixture of sport and entertainment will provide a wide range of activities away from Centre Court. One of the attractions is the new Porsche World in which visitors can marvel at quite special Porsche vehicles and experience them. There are also autograph sessions with the stars plus “have a go yourself” activities for young and old. The Porsche Mini Tennis Grand Prix will see U-9 juniors competing against each other in the Public Village on the finals weekend. Another sporting highlight alongside the tennis is the Final Four badminton tournament for the German championship on Court 1 on 22 and 23 April. A delight for the senses is promised by a ballet piece on Centre Court. The world-famous Stuttgart Ballet’s performance will once again get the spectators in the right mood for the final.

Live on TV and in Internet: multi-media experience for tennis fans
Every match in the Porsche Arena will be televised live in Germany by Eurosport, Tennis Channel and Porsche Tennis TV. Broadcasts will begin on Monday at 5 pm (all times CEST). The two singles semifinals will take place on Saturday at 2 pm and 4 pm. The final starts on Sunday at 1 pm. Tennis Channel will additionally show the qualifying matches plus all the Court 1 matches. The schedule with all the broadcasting times can be found below. Internationally, the Porsche Tennis Grand Prix can be viewed in over 100 countries. The detailed schedule can also be found at www.porsche-tennis.com.

The Live TV and Streaming Times in Germany, Centre Court


All times CEST
Subject to change.
* Tennis Channel will televise every Court 1 match live from Monday


Exclusive look behind the scenes and interactive “have a go yourself” activities
The Porsche Tennis TV broadcasts on the www.porsche-tennis.com tournament website will be supplemented by a live programme revolving around the main matches. Awaiting the fans alongside all the latest news is also exciting extra information about everything happening at the tournament with an exclusive look behind the scenes. There will also be interviews with a variety of guests and entertaining videos with the tennis stars. Viewers can again choose between four different camera positions like for example the Umpire Cam or the Net Cam in the middle of the net. There are also further interactive “have a go yourself” activities” for the community. All the practice sessions on Courts 1 and 2 will be televised.

Advance ticket sales
Tickets for the 45th Porsche Tennis Grand Prix from 16 to 24 April are available at Easy Ticket Service by calling +49 711 / 2 55 55 55 or in Internet at www.easyticket.de. Also available are tickets for the Final Four Tournament for the German Badminton Championship.


More information, as well as videos and photos, can be found in the Porsche Newsroom: newsroom.porsche.com
The consumption and CO₂ emission values were calculated according to the new Worldwide Harmonised Light Vehicle Test Procedure (WLTP). The NEDC values derived from this must continue to be specified for the time being. These values cannot be compared to the values calculated based on the NEDC measuring procedure used up to now. 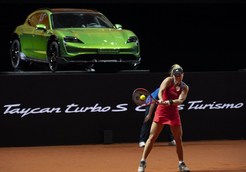 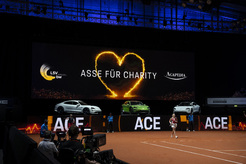 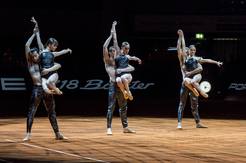 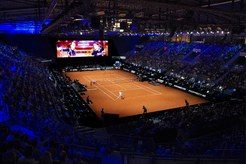