“It’s nice to be back, especially playing in front of spectators”

Stuttgart. The Porsche Tennis Grand Prix picked up speed on Easter Monday when the main draw matches got underway. In the first singles on Centre Court, Ekaterina Alexandrova eventually overcame the Chinese Shuai Zhang in two hard-fought sets that both went to a tie-break. Liudmila Samsonova afterwards had little trouble in defeating the French qualifier Chloe Paquet 6-0, 6-0. The day’s first match was a doubles in which the first time pairing of Viktorija Golubic/Marketa Vondrousova (Switzerland/Czech Republic) were easy 6-3, 6-1 winners against Ulrikke Eikeri and Alexandra Panova. The action on the first day of the tournament proper was brought to a close by a stand-out doubles containing three Top 10 singles players. Paula Badosa (Spain/No. 3) and Aryna Sabalenka (No. 4), last year’s singles runner-up, won 7-5, 7-5 against Ons Jabeur (Tunisia/No. 10) and Ellen Perez (Australia).

After the opening main draw encounters, the top stars will be entering the tournament fray on Tuesday. Having battled their way through qualifying to gain a main draw berth at the long-standing tournament where there is a Porsche Taycan GTS Sport Turismo at stake for the winner, two Porsche Talent Team players have some serious work ahead of them. Right away in the first match of the day on Centre Court at 12.30 pm, Eva Lys will take on the Swiss Viktorija Golubic. Nastasja Schunk will face one of the tournament’s top players – Elena Rybakina from Kazakhstan who is world-ranked No. 19 and therefore 205 positions ahead of the German. The match is scheduled for not before 5.00 pm.

Bianca Andreescu making a long-awaited comeback in Stuttgart
A strong opponent is also awaiting Jule Niemeier. The third Porsche Talent Team member has been given a main draw wildcard and will be up against Bianca Andreescu in her opening match. The Canadian hit the limelight when winning the 2019 US Open but has since had to contend with a series of injuries and many setbacks in her fledgling career. Equipped with a wildcard, she is making a long-awaited comeback on the WTA Tour at the Porsche Tennis Grand Prix after a long lay-off. “I am very excited to play again and am looking forward to my first tournament. The last couple of months have been difficult but I just felt that my time off was enough,” she said. “I got bored of not challenging myself on the court. I really missed the fire I had competing. That was kind of like the point where I felt it was time to start playing again.”

Ons Jabeur, the first North African player to break into the Top 10, will be back in action on Tuesday when she will take on the Czech Marketa Vondrousova – not before 2.30 pm. Another player will be making her first appearance in the Porsche Arena in the final match of the day when the American shooting star Coco Gauff meets Daria Kasatkina.

Day off for Angelique Kerber and Emma Raducanu
After their stints in the Billie Jean King Cup, both Angelique Kerber and Emma Raducanu can look forward to another day off from competitive play. After hitting on Centre Court for the first time, the Porsche Brand Ambassadors both faced the journalists’ questions in the Press Centre. “It’s nice to be back, especially playing in front of spectators. The Porsche Tennis Grand Prix is a quite special tournament for me. All the other players also love coming to Stuttgart,” said Angelique Kerber who won the tournament in 2015 and 2016. Commenting dryly on the draw that has produced the world No. 6 Anett Kontaveit from Estonia as her first opponent, she said: “The draw often doesn’t say much. It won’t be an easy first round. I will have to play my best tennis right from the start.”

Emma Raducanu is celebrating her debut at the Porsche Tennis Grand Prix. The 2021 US Open winner does not have a great deal of experience on clay as there are hardly any clay courts in her home country, Great Britain. However, it does not bother her. “I’m looking forward to spending more time on clay this year. I keep telling everyone around me that one day clay is going to be my surface,” she said. The 19-year-old Briton is calmly coping with the increased interest in her person after her success in New York: “The more experienced I get, the better I can deal with everything.” She summed up her first impressions from the tournament venue by saying, “I love to be here. It’s amazing being surrounded by all the Porsches.”

Porsche Tennis Grand Prix Day 3 - "It’s nice to be back, especially playing in front of spectators" 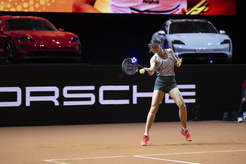 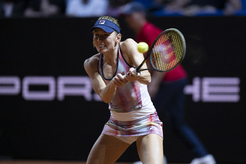 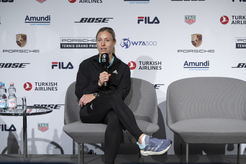 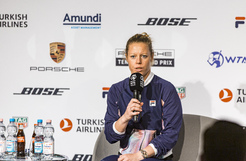 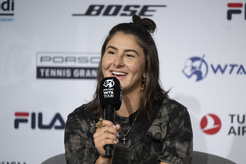