Despite time in the lead, neither Porsche 99X Electric saw the flag in Monaco

Stuttgart. A disappointing race day for the TAG Heuer Porsche Formula E Team – despite a good start at the Monaco E-Prix and time spent leading the field in the first half of the race, neither Porsche 99X Electric crossed the finish line. After a strong performance among the frontrunners, Pascal Wehrlein (GER/#94) retired with a technical defect. André Lotterer (GER/#36) became the unwitting victim of a collision, which threw him out of contention at race six of the ABB FIA Formula E World Championship in the Principality on the Cote d’Azur.

In the drivers‘ standings of the all-electric racing series, André Lotterer ranks sixth after six of 16 races with 43 points. Pascal Wehrlein sits just one point behind in seventh place. In the team standings, the TAG Heuer Porsche Formula E Team is sixth with 85 points.

Race 6
In qualifying, Pascal Wehrlein narrowly missed out on scoring his second pole position this season. Starting the race from the first grid row, he put in a strong performance and, with a bold overtaking move after the tunnel exit before the harbour chicane, swept into the lead shortly before halftime. While Wehrlein worked hard to pull clear from his pursuers, his Porsche 99X Electric suddenly lost pace early in the second half of the race. His teammate André Lotterer tackled the race from the sixth grid spot. While running in fifth, he was shunted into the barriers by a rival at the restart after a safety car phase and forced into retirement.

Comments on the Monaco E-Prix, Race 6

Florian Modlinger, Director Factory Motorsport Formula E: “This is a bitter day for the team. After a very good first half, Pascal was leading the field only to have a technical defect throw him out of contention. We now have to analyse what happened. At the restart after the safety car phase, André was knocked out of the race by a competitor. The driver and the team put in a strong qualifying performance and a promising start to the race, but unfortunately weren’t rewarded in the end. Still, we’re looking ahead with confidence. We’ve been competitive on all tracks this season. In Berlin, we’ll try to come back even stronger and earn the points that we missed out on in Monaco despite our good effort.”

Pascal Wehrlein, Porsche works driver (#94): “What a disappointing weekend. On the positive side, the qualifying went well and we were fast in the race. We don’t yet know why the car suddenly stopped while I was in the lead.”

André Lotterer, Porsche works driver (#36): “The race went really well at first. I was fighting for a better position when the guy behind me hit the rear of my car and shoved me into the wall.”

Next up
The next race weekend for the TAG Heuer Porsche Formula E Team is on 14 and 15 May with the Berlin E-Prix, the 7th and 8th round of the ABB FIA Formula E World Championship.

Porsche in Formula E
In 2021/2022, the TAG Heuer Porsche Formula E Team contests its third Formula E season with the Porsche 99X Electric – and clinched an historic one-two result in Mexico on 12 February 2022. At the debut event in November 2019, André Lotterer scored second place at the season-opening race in Diriyah: a dream start and proof that with the Porsche 99X Electric, Porsche had a competitive vehicle right from the outset. Last season, Wehrlein claimed pole position in Mexico City. Two podium results followed with Wehrlein finishing third in Rome and Lotterer securing second in Valencia. As an accelerator for innovative and sustainable mobility technologies, Formula E has brought thrilling motorsport to people living in major cities since 2014. With the all-electric Taycan, Porsche supplies the safety car this season, underlining the importance of Formula E for Porsche Motorsport.

Despite time in the lead, neither Porsche 99X Electric saw the flag in Monaco 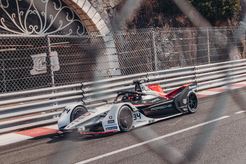