Solid start for Porsche into the Berlin Formula E weekend

Stuttgart. The TAG Heuer Porsche Formula E Team made a solid start to the Berlin Formula E weekend, in a first-class race with many overtaking manoeuvres and changes at the front of the field. At the wheel of his Porsche 99X Electric, André Lotterer (GER/No. 36) clinched fourth place, narrowly missing out on a podium spot at round seven of the ABB FIA Formula E World Championship. His teammate Pascal Wehrlein (GER/No. 94) took the fastest race lap and was rewarded with an extra point. He crossed the finish line in sixth place. On Sunday, race 8 of the innovative electric racing series will be contested on the apron of the historic Tempelhof Airport.

In the drivers’ classification of the ABB FIA Formula E World Championship, André Lotterer ranks sixth after 7 of 16 races with 55 points. The TAG Heuer Porsche Formula E Team advanced to fifth place in the team classification with 106 points.

Race 7
André Lotterer started race 7 on the 2.355-kilometre Tempelhof Airport Street Course from the fifth grid spot. At the wheel of his Porsche 99X Electric, he drove the entire distance among the leading group and even briefly led the field twice. In a dramatic final phase, Lotterer was only fractions of a second shy of a podium place. Starting from P6 on the grid, Pascal Wehrlein, the winner from the Mexico Formula E race this season, put in a solid performance in the second Porsche 99X Electric - he also maintained the pace of the frontrunners over long stretches. Along with his team mate, earned critical championship points today.

Comments on the Berlin E-Prix, Race 7

Florian Modlinger, Director Factory Motorsport Formula E: “It’s wonderful to drive in Berlin with such a setting. The qualifying was very close, we’re talking about thousandths of a second for André. And the race treated fans to everything that makes Formula E so exciting. We were up there at all times today and scored 21 points, plus Pascal took the fastest race lap. We’ll now turn out attention to tomorrow’s second race and work hard at getting even further up the front.”

André Lotterer, Porsche works driver (#36): “We made the best of our opportunities today. Obviously, I’m disappointed that it wasn’t enough for a podium result, especially after having been among the leading pack over the whole distance. We’ve achieved a top level, we now just need to improve a little more, then an even better result is possible tomorrow.”

Pascal Wehrlein, Porsche works driver (#94): “Apart from the duels, the qualifying was very promising. So the race was a little disappointing for me. It wasn’t easy, there was a great deal of strategy involved. Still, I took my first fastest race lap in Formula E. Hopefully we’ll be able to earn some more points in tomorrow’s race.”

Next up
Race 8 in Berlin gets underway on Sunday, 15 May, at 3.05 pm. The worldwide broadcasting schedule of the Formula E event is available on: https://www.fiaformulae.com/watch/ways-to-watch.

Porsche in Formula E
With a historic one-two result thanks to Pascal Wehrlein and André Lotterer in the Porsche 99X Electric, the TAG Heuer Porsche Formula E Team celebrated its greatest success to date in Mexico on 12 February 2022. The team contests its third season in the world’s first all-electric racing series. At the debut event in November 2019, André Lotterer scored second place at the season-opening race in Diriyah: a dream start and proof that with the Porsche 99X Electric, Porsche had a competitive vehicle right from the outset. Last season, Wehrlein claimed pole position in Mexico City. Two podium results followed with Wehrlein finishing third in Rome and Lotterer securing second in Valencia. As an accelerator for innovative and sustainable mobility technologies, Formula E has brought thrilling motorsport to people living in major cities since 2014. With the all-electric Taycan, Porsche supplies the safety car this season, underlining the importance of Formula E for Porsche Motorsport. Solid start for Porsche into the Berlin Formula E weekend 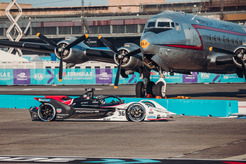 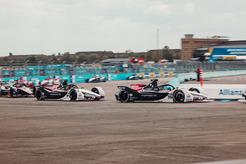 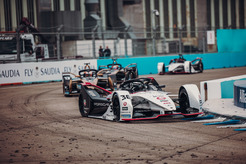 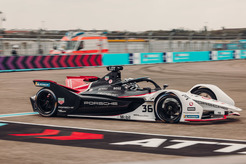 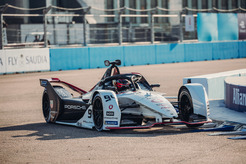 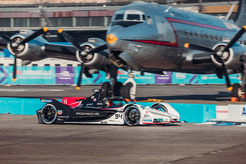 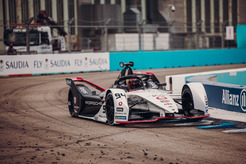 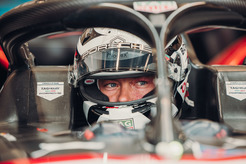 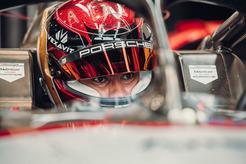