Stuttgart. Porsche Team Germany will again belong to the Fed Cup World Group in 2018. The team captained by Barbara Rittner beat Ukraine 3-2 in the Porsche Arena to remain in the top division. In the qualifying tournament of the Porsche Tennis Grand Prix, two German players advanced to the third round.

With Germany 2-0 up going into the second day of the Fed Cup tie, Angelique Kerber lost the opening showdown between the two top players 6-4, 6-2. It was her fourth defeat in a row against the world No. 13. The result duly increased the pressure on Julia Görges in the second singles against Lesia Tsurenko. Görges, who on Saturday performed excellently to beat Svitolina in a three-setter, began nervously and was quickly behind 4-1. The world No. 46 then found her form to reel off five games in succession and with it the set 6-4. Things went much the same way in the second set – Görges lost the first three games before getting back on track to win the match 6-4, 6-4. It meant that Porsche Team Germany were 3-1 up and could not be caught going into the doubles. They are also certain of a place in the Fed Cup World Group in 2018.

“I’m proud to belong to this team. Everybody played a part in the win,” said Julia Görges after her second victory. In the final doubles, which was only for the statistics, Laura Siegemund and Carina Witthöft lost 6-4, 4-6, 10-6 to Nadiia Kichenok and Olga Savchuk.

There were also exciting matches on Sunday in the second round of qualifying at the Porsche Tennis Grand Prix. Katharina Hobgarski, a member of Porsche Talent Team Germany, has progressed to the third round. The 19-year old youngster battled hard for two hours 31 minutes to overcome the American Sachia Vickery 4-6, 7-6, 6-4. Also one step away from a main draw berth is compatriot Tamara Korpatsch. Ranked No. 11 in Germany, Korpatsch beat the Frenchwoman Ocean Dodin 2-6, 6-3, 7-6. 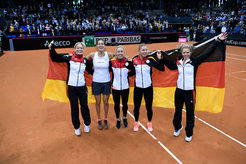 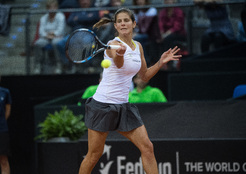 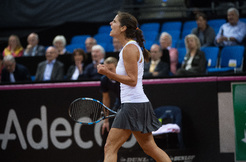 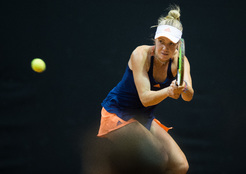 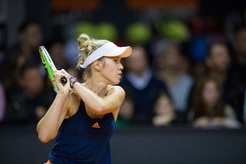 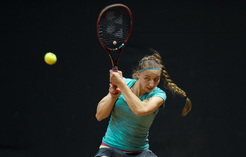