Stuttgart. Laura Siegemund feels at home at the Porsche Tennis Grand Prix – and that in more ways than one. On the one hand, the 29-year old Porsche Team Germany player lives in Stuttgart and, on the other, she celebrated her biggest success to date in the Porsche Arena in 2016. In winning seven times last year, the local hero stormed her way from qualifying to the final. On Tuesday, she safely negotiated the first hurdle at the anniversary tournament. Tenacious and full of energy, Siegemund beat Shuai Zhang from China, 6-2, 7-6. After losing to the world No. 32 in Brisbane in January, she wrapped up the win with her second match point after one hour 45 minutes. Germany’s No. 2 was accordingly well satisfied. “It feels like the final was only yesterday,” she said. “I’m so eager to play at the moment.” In the last 16, she will play the Russian Svetlana Kuznetsova, the first seeded player to reach the next round. The winner of the 2009 Porsche Tennis Grand Prix beat the Dutchwoman Kiki Bertens 6-3, 5-7, 6-3. “It’ll be a tough nut to crack,” said Laura Siegemund, “I’ll only survive if I’m perfectly prepared.”

Anett Kontaveit’s winning ways have continued. After her three victories in qualifying, the 21-year from Tallin in Estonia today followed up with a success (7-6, 6-4) in the tournament proper. She duly ended the tournament for the Croatian Ana Konjuh (19), the youngest player in the main draw. Another player no longer in the tournament is Agnieszka Radwanska. The No. 7 seed from Poland lost to Ekaterina Makarova 6-4, 6-2. The world No. 8’s loss was a minor surprise. Of the eight matches between the two, Radwanska has won six and her last defeat came in Wimbledon in 2014. In today’s meeting, their first ever on clay, it was the Russian that came out on top. “I’m very happy,” said Makarova, “I played really well even though I’m not a clay court specialist.” 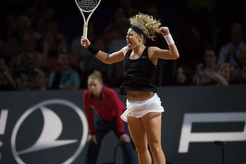 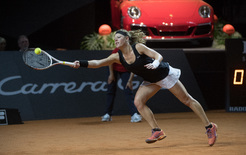 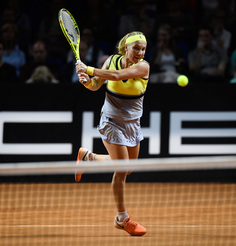 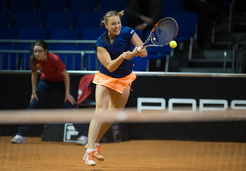