After the convincing performance, Julia Görges’ 2017 tennis season will now go into extra time. The win at the Premier Event in Moscow means that the 28-year old German will not only move up to No. 18 in the world rankings, she will also qualify at the last minute for the WTA Elite Trophy. The second year-end tournament alongside the WTA Finals in Singapore will be played in Zhuhai, China starting on October 29. For Julia Görges, it was the first tournament success since her sensational win at the 2011 Porsche Tennis Grand and her third in total. She bagged her first title at the Bad Gastein event in 2010.

“The win feels fabulous. I’ve worked really hard for this moment and I’m so happy,” said Julia Görges after her victory which has made her the new German No. 1. She has already this year finished runner-up in Mallorca, Bucharest and Washington D.C. Moscow was therefore her first tournament win of the season. Playing against the 20-year old Daria Kasatkina, who in spring won her first ever WTA tournament in Charleston, she put on an excellent performance. Playing powerfully, she took the first set in only 25 minutes. After a total of 66 minutes, she closed out the match with her first match point. The victory is confirmation that the decision she made two years ago to go down a new road was the right one. “Back then, I started on a new course and completely rebuilt my team,” she said in an interview. “After such a radical change, good results don’t come after only a few months. However, despite some setbacks, we carried on working with the same determination and commitment. And now it’s paying off.”

Carina Witthöft celebrated the biggest success of her career in Luxembourg after beating Monica Puig in her first final on the WTA Tour. The 22-year old German, who was supported within the Porsche Talent Team Germany setup until 2015 before moving up to become a member of the Fed Cup team captained by Barbara Rittner, performed highly impressively and confidently against the Rio 2016 gold medal winner. After letting a comfortable lead slip in the second set, she showed no nerves when clinching a deserved victory with her first match point after one hour 31 minutes. It means a return to the top 60 in the world rankings for the first time since October 2015. From Monday, she will be the new No. 58.

Award for Angelique Kerber
Angelique Kerber has been honoured with the Jerry Diamond ACES Award by the WTA. Since 1995, the prize has been given to the player, who goes above and beyond in promoting the sport of women’s tennis to fans and communities. In the jury’s eyes, the Porsche Brand Ambassador and former world No. 1 deserves the award after consistently participating in charitable events and kid’s clinics all around the globe as well as numerous other activities with children. 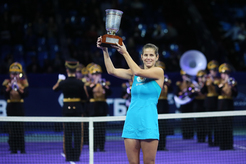 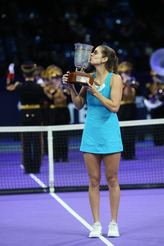 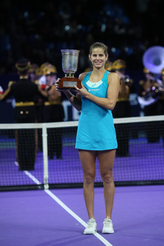 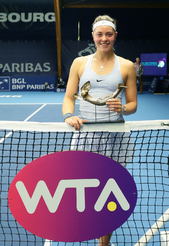 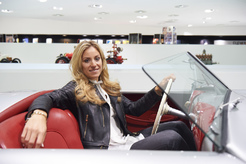